NOTHING BUT THE CLOTHES ON HIS BACK

Home > Stories > Oakland > NOTHING BUT THE CLOTHES ON HIS BACK 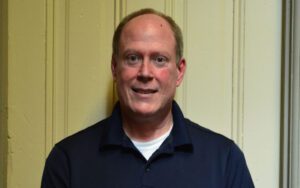 For most of his adult life Cliff worked as the Chief Financial Officer for several large corporations. He often traveled to London, Paris, New York and San Francisco for work. He got so wrapped up in the success of his career that he felt like he didn’t have a greater purpose.

His despair turned into severe depression before he even realized it was happening.

“I went off the deep end,” he said. “I did nothing for two months but sleep.”

Instead of getting treatment, Cliff had a terrible thought that alcohol might help him feel better.

“I remember when I picked up that first drink,” Cliff shared. “I said out loud, ‘This is going to end badly.’”

The Final Blow
Not only did Cliff end up in the hospital, but he lost his job and his home. His lowest point came when he fell asleep on the sidewalk leaning against a building. When he woke up the next morning, his backpack had been stolen. He had nothing left but the clothes he was wearing.

That’s when he came to CityTeam.

“I’m 52 and came to CityTeam and started studying the Bible for the first time,” said Cliff. “I started understanding about a personal relationship with a God who loves me. It’s been amazing to discover the peace and purpose I believe He planned for me, which I had never felt before. It’s been a hole inside until now.”

GOD CAN CHANGE ANYONE

I grew up in Oakland and fell into my addiction at the early age of twelve. Throughout my life I […]

FIGHTING FOR HIS FAMILY

“My whole life changed the day I walked in this door. The people I was surrounded by, I could just […]

LIVING AND LEARNING TOGETHER

Before coming to CityTeam and pursuing recovery, Daniel turned to alcohol to escape. Living a life without hope, he had no will to live. Today, Daniel is living a full and sober life[…]